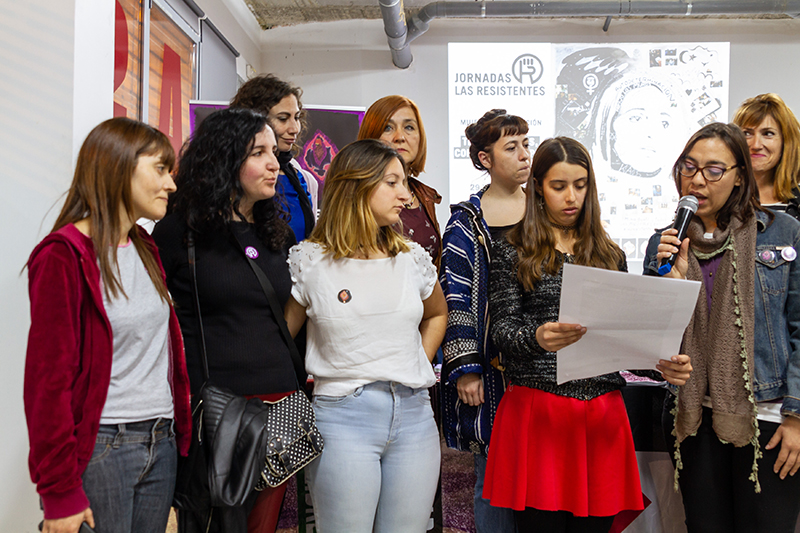 THE RESISTANT MANIFESTO In support of Saharan women (ENGLISH)

As women, we put up with different forms of violence committed against our bodies and our lives every day, all around the world. We fight for our rights and the rights of our communities in the streets and in our homes; from the mountains and deserts; in schools, hospitals, and universities; in both open and armed conflict; in refugee camps and in occupied lands. We have always taken part in social protests and have mobilized to seek the peace and the recognition of rights. In spite of all this, we have been excluded from power and decision-making processes throughout history, even in times when our actions have helped solve conflict in a non-violent, dialogical way.

The role of women seeking peace in open and armed conflicts like the one in Western Sahara is largely underestimated, mainly because women are left out from political negotiations within the established patriarchal system. Even then, we have managed to create alternatives to said power structures through social mobilization in an attempt to influence politics.

Women and girls suffer greater violence in times of conflict and post-conflict. It is therefore imperative to consider a gender perspective in peace-seeking processes as stated on resolution 1325 adopted by the United Nations. The UN urges Member States to “ensure increased representation of women at all decision-making levels in national, regional and international institutions and mechanisms for the prevention, management, and resolution of conflict” and encourages the Secretary-General to “implement his strategic plan of action (A/49/587) calling for an increase in the participation of women at decision-making levels in conflict resolution and peace processes”.

The signing of peace treaties does not mean conflict is over. Transitional justice is essential to ensure those guilty of committing genocide, crimes against humanity, and war crimes do not go unpunished. Crimes committed against women in armed conflict situations cannot be pardoned and used as a bargaining chip to build the peace. In this regard, the peace treaties signed in November 2016 by the Colombian government and the FARC–EP set a precedent because a gender perspective was included thanks to the efforts of farmers, displaced women, and feminists. They demanded women be allowed to take part in negotiations and specific transitional justice measures be taken to prevent gender-based violence from taking place in post-conflict situations.

In the case of Western Sahara, women had no representation at the negotiation tables with Morocco until November 2018, when the Polisario Front included Fatma Mehdi in the negotiation of peace agreements with Morocco in the United Nations Office at Geneva. Without a doubt, this is a great step for the Saharan women’s voices to start to be heard, but there is still a lot of work to do to achieve equal participation in decision-making processes and the inclusion of a gender-based approach in future peace agreements with Morocco. Saharan women are suggesting different strategies for the construction of peace from the beginning of the conflict: they dismantled the

refugee camps and built schools and hospitals to allow for the survival of their people. They created the Casas de las Mujeres (Women’s Homes), meeting places among women, for training and empowerment. In the occupied lands, they resist Moroccan occupation each day by leading peaceful protests in the streets of Laayoune and Smara, fighting for the liberation of political prisoners and for the right to self-determination, as well as building protest camps, such as the Gdeim Izik camp in 2010.

The women that have gathered in the Jornadas Las Resistentes: Mujeres y Resolución de Conflictos. Tejiendo redes, construyendo paz (The Resilient Ones Conference: Women and Conflict Resolution. Devising Networks, Building Peace), from Western Sahara, Guatemala, Colombia, Kurdistan, Chile, Mexico, Portugal, El Salvador and Spain, demand our right to be present at every level of decision-making and peace and rights building processes. We demand not to be seen as just victims and also that our political agenda be recognized. We unite to support Saharan women and to be the amplifiers of their demands, which they have shared in this manifesto:

Saharan women are the driving force of revolution, we are leaders of the Intifada. We always occupy the front line in the fight; resisting peacefully, defending tirelessly our right to self-determination and the right to independence. In the occupied lands, we put up with repression, incarceration, beatings, detentions, tortures, forced disappearances; defending our flag, our ideas, with our own body. Morocco has stolen all our rights, pushing us to marginalization in our land or to live far away from home. In the camps, we resist the exile, the separation, the scarcity, the hardness of the hamada, the void. In every place, we suffer as activists and as women. We are paying dearly for it. Listen to us! It is our right! Saharan women demand that our voices be heard and our claims be honored. We demand that, once and for all, our rights be respected, as activists and as women. We are building resilience and want to build peace. This is non-negotiable. We want to have the right to live with dignity. We want to feel safe, to live our lives, to be citizens in our land, to vote, to have the opportunity to learn. We also want to be the first ones in the construction of a Western Sahara that is free and equal. These are our demands.